Prime Minister Narendra Modi does not look like the kind of person who would make a habit of bending backward. The same, however, cannot be said of his likeness. Every morning since June 5, between 8.17 am, and 8.22 am, the Modi anime on social media has been twisting and turning and bending back and forth while doing the Surya Namaskar, the Setu Bandhasana, the Shalabhasana, the Bhujangasana, the Shashankasana, and so on. His Twitter handle triggers the anime. Its breath is an ethereal blue. Hair and beard a godly white. And even when he does the Pawanmuktasana, or the wind relieving pose, his expression is beatific, in tune with the soft music that plays in the background.

Ramdev who? The animated videos released in the run-up to the 5th International Day of Yoga (IDY) on June 21 are the latest in a continuing effort by the PM to establish the supremacy of yoga in the world and his supremacy over the world of yoga. As the countdown to IDY2019 continued, Indian embassies worldwide started to push out photographs of locally held yoga events. The PM retweeted these. Chests swelled in pride. And yet, come to think of it, the world has been familiar with yoga for a long, and the reason is not Narendra Modi. 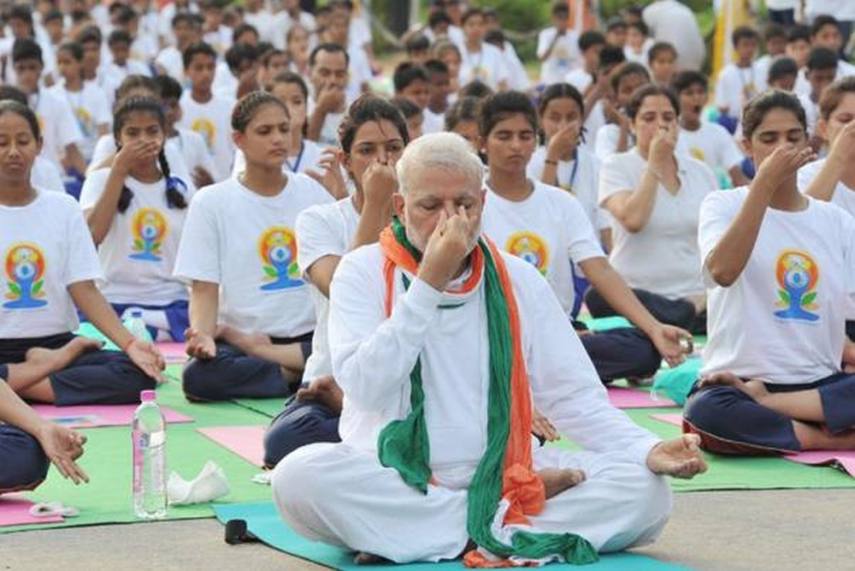 America first heard of yoga, courtesy of Swami Vivekananda. 1893, Parliament of Religions, Chicago. But no, Americans don’t credit him with their introduction to yoga. In the 1920s, Paramahansa Yogananda set up an organization in Boston to teach yoga. But they don’t thank him either. Tirumalai Krishnamacharya is the father of modern yoga, but very few people remember his name today. His disciples who popularised yoga in America were Pattabhi Jois, B.K.S. Iyengar, Indra Devi, and Desikachar. How many of those names have you ever heard? A documentary titled British Beatles Yoga 1960 opens thus: “In Britain, we didn’t do bending up until the 1960s… Then four lovable mop-tops from Liverpool went to India, and overnight yoga’s image was upgraded…”

The main event of IDY2019 was in Ranchi, led by the PM. Jharkhand Assembly elections are scheduled later this year. They are just saying. Everyone from the working president of the BJP, J.P. Nadda, to the Lok Sabha Speaker, Om Birla, led yoga events. Visual testimony upon testimony. CRPF was doing yoga inside Saranda forest, a Maoist stronghold. Citizens in Azamgarh, at the peak of the Nilgiris, in front of the Victoria Memorial in Calcutta. ITBP personnel in Kinnaur district. Indian Navy and Central Industrial Security Force personnel at Marina Beach. Actor Akshay Kumar posted a photograph of his mother doing yoga post knee surgery. The defense spokesperson tweeted a photograph of the Army Dog Unit at it. Union minister Prakash Javadekar said, “Yoga has become a mass movement.

Within India, yoga had become associated in the last two decades with those referred to as godmen (though God knows yoga is strictly for men). And then it became synonymous with Ramdev. For a good reason too. The Ravi Shankar and Sadhgurus have essentially been talkers, but this man had come to embody yoga by hook and no fluke. He didn’t stop at teaching India breathing exercises. India held its breath as he stacked up his promises tall and neat — yoga can cure cancer, AIDS, homosexuality. Then, somewhere between the Bitilasana and the Halasana, his political core came alive.

The occasional politician in India had dabbled in yoga, but no one had tried to popularise it. It is only now that Jawaharlal Nehru’s headstand photograph is coming out of the woodworks. Indira Gandhi’s yoga mentor, Dhirendra Brahmachari, assumed “extra-constitutional powers” when his protégé became PM. There are anecdotes about how the late I.K. Gujral, who was then minister of state for works and housing, had his portfolio changed when he refused to oblige the yoga guru. But it was Ramdev who was possibly the first to think of using the mass popularity he had attained because of yoga as the means to realize a political end.

From 2006, when CPI(M)’s Brinda Karat accused him of using human bones in his ayurvedic medicines, to 2011, when he planned his political party, to 2014, when the then Gujarat chief minister Modi touched his feet at Delhi’s Talkatora Stadium, Ramdev had come a long way. That day at Talkatora, there was a context and a subtext. Context: 20th anniversary of his Patanjali Yogpeeth. Subtext: The Yoga Guru endorsing a prime ministerial candidate. Somewhere along the way, the subtext, like Stanley Ipkiss in The Mask, first turned on its head and then gobbled up the context. Modi proposed the idea of a yoga day at the UN General Assembly in September 2014. In December that year, the draft resolution was introduced; 177 member states endorsed it. 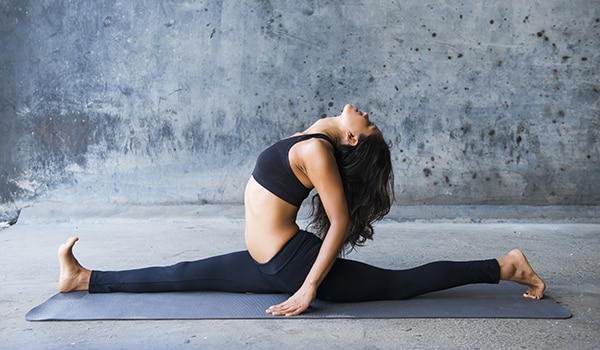 The rationale offered for choosing June 21 is the longest day of the year in the northern hemisphere. You cannot find any “ism” there — Savarkar was born in May, S.P. Mukherjee died in June, but on the 23rd, Patel’s months are October and December. It is plain old geography, sun, earth, maximum tilt. Modi didn’t stop at earmarking a day either. A yoga anthem was picked; as of 2015, yoga is a recognized sports discipline; a yoga fest was instituted; yoga conferences; yoga committee in universities; the Union ministry of home affairs introduced short-term yoga programs for tourist visas.

But there is an “ism,” and it is in the pose. A pose that connotes something essentially Indian and, by default, essentially Hindu. A popular pose but also requires perfection is born of dogged practice, is about core strength and endurance, is of the body, and also of the controlling mind. Nehru practiced yoga, and it is being said now that he moved a resolution in the Rajya Sabha stating that yoga should be a part of health education in the country. But it is Narendra Modi who has seized on the symbolism of yoga and is harnessing its range of appeal to foreground an “ism” within India and before the world. As for Baba Ramdev, he has to be content touching toes in the company of the rather inflexible Devendra Fadnavis someplace in Nanded.

Why Your Yoga Practice Should Make You Happier At Work